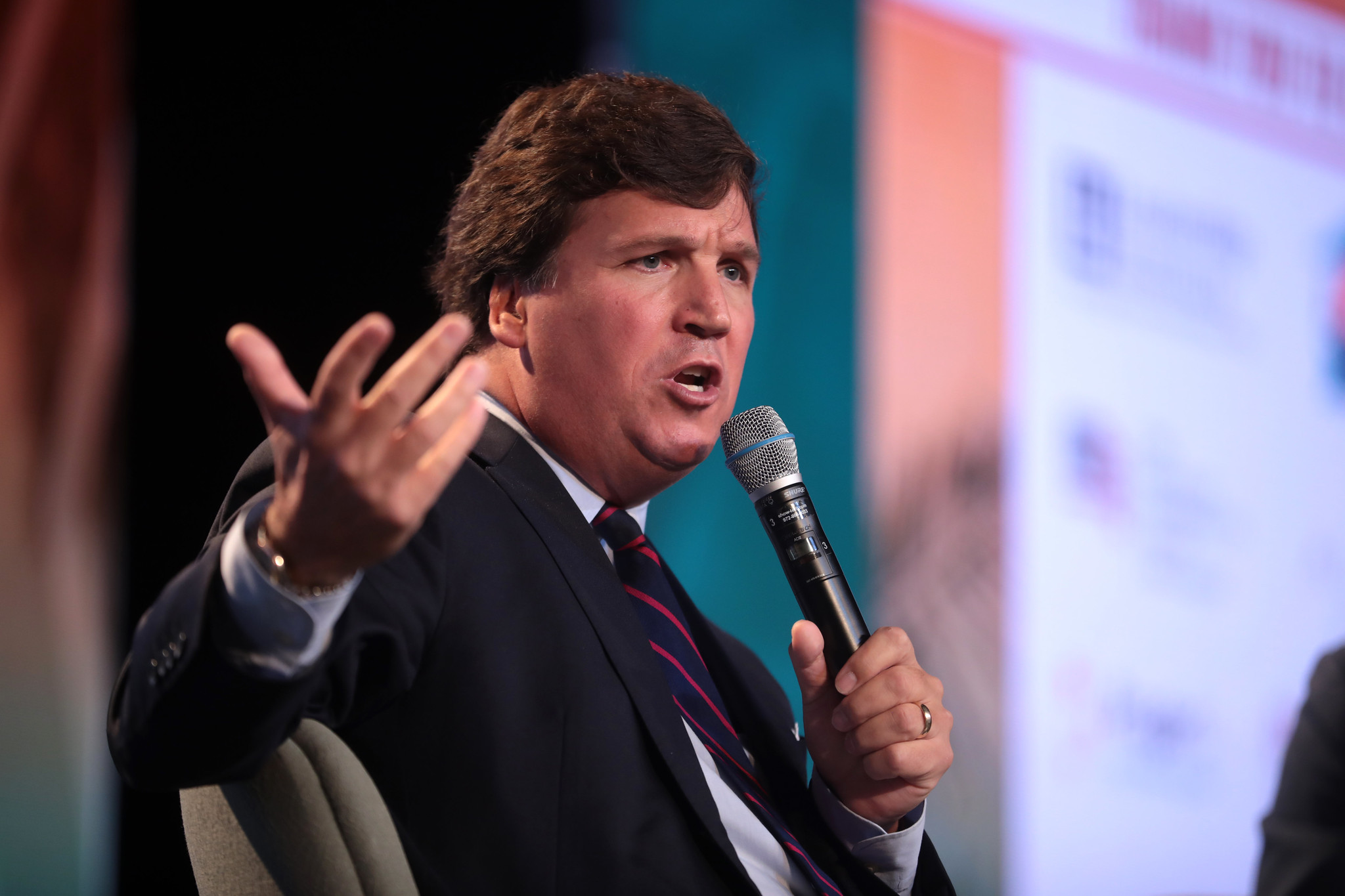 Barely three days after a shooter at an LGBTQ club killed five people and injured dozens, right-wing media figures have been blaming LGBTQ people for causing the violence. Others are also attacking the military veteran who stopped the shooter.

Their claims continue a years-long campaign of stochastic terrorism in which they’ve accused queer people and their allies of grooming children for sexual abuse through LGBTQ school content and drag shows, and also of mutilating children’s genitals through gender-affirming healthcare for transgender youth.

While genital surgeries aren’t conducted on minors and no kids have ever been molested during a drag show, none of these figures have spoken as passionately against forced genital surgeries for intersex kids or the literal thousands of child rape cases that have occurred in U.S. churches, nor have they promoted organizations that actually work against child sex abuse and trafficking.

After the shooting, conservative podcaster and transphobe Matt Walsh said that drag shows, like the one held at Club Q on the night of the shooting, exist to let queens “satisfy their fetish for cross-dressing in front of children” and to “indoctrinate children into queer theory [and]… turn your children queer, that is the goal.”

Ignoring the fact that Club Q only allows patrons ages 21 and up, his rhetoric matches those of armed right-wingers who have showed up to intimidate drag performers at restaurants of all-ages shows and library drag queen story hours.

“All of it is so horrifying, so perverse, so degraded… it’s so horrifying,” he continued. He then said that LGBTQ people’s claims that his rhetoric encourages violence are “invented out of whole cloth.”

He then revealed his true game by asking drag performers (or “disgust freaks” as he regularly calls them), if his words are really causing that much violence and chaos, why do they continue to hold drag events?

“By their version of events, it’s causing this much chaos and violence. Why do you insist on continuing to do it? …If the effort to have men crossdress in front of children is putting people’s lives at risk, why are you still doing it? Is that important to you?”

According to Walsh, drag performers shouldn’t exist because right-wingers who listen to him will just shoot up more clubs.

A recent social media post from @realloveconnie read, “The biggest danger of taking your child to a drag show is that a Christian could show up with a gun.”

It took three days after the mass shooting at Club Q for the Daily Wire’s Matt Walsh to blame the victims for the massacre. pic.twitter.com/08kitTdpMt

Walsh also tweeted, “Leftists are using a mass shooting to try and blackmail us into accepting the castration and sexualization of children. These people are just beyond evil. I have never felt more motivated to oppose everything they stand for, with every fiber of my being. Despicable scumbags.”

“People die and the first thing they think is, ‘Yes! We can use this as ammo against conservatives who don’t think children should be exposed to drag shows!’ Soulless demons. Evil to the core. Truly.”

Matt Walsh isn’t upset that someone shot up a gay bar, he’s upset that more people weren’t killed. He has a bloodlust for the murder of LGBTQ people. He’s doubling down on it and wants more of it. pic.twitter.com/QEyDkuMXzN

In response to Walsh’s rhetoric, Twitter user Nicholas Grossman wrote, “’Stop demonizing and dehumanizing the group of people that were just targeted for murder’ isn’t politicizing tragedy. It’s responding to others politicizing some people’s very existence as free and equal human beings, a response that respondents badly wish were unnecessary.”

“Stop demonizing and dehumanizing the group of people that were just targeted for murder” isn’t politicizing tragedy. It’s responding to others politicizing some people’s very existence as free and equal human beings, a response that respondents badly wish were unnecessary.

But then he said the connection between LGBTQ activism and the above things is “a very specific religious ideology that’s true, is happening and is “absolutely real.”

He then said the shooting has become “a pretext for yet more censorship of [conservative public] speech.”

“You are responsible for this, they told you, because you said the wrong things,” Carlson told his viewers. “You are guilty of stochastic terrorism, inspiring violence by your beliefs. Anderson Lee Aldrich [the Club Q shooter] committed mass murder because you complained about the sexualizing of children. Every time you object to drag time story hour for fifth graders or point out that genital mutilation is being committed on minors — which it is — every time you say that, you are putting people’s lives at risk.”

He added, “The truth is that some adults in this country, apparently a growing number, have a deeply unhealthy fixation on the sexuality of children — when you say that out loud, you get people killed.”

In response, Twitter user Kat Abu published a thread that included the numerous broadcasts in which Carlson has talked at length about children’s sexuality and their genitals.

Tucker Carlson just started his show by telling his audience that “violence and cruelty should always horrify us,” referring to the CO Springs shooting this weekend.

Jaimee Michell, founder of Gays Against Groomers, told Carlson that the shooting occurred in part because of gender-affirming healthcare for transgender children.

While she acknowledged that LGBTQ activists feel that the “groomer” slur “is putting a really large target on our backs,” she missed the irony in the fact that she too uses that slur against her own community.

“The tragedy that happened in Colorado Springs the other night, it was expected and predictable,” Michell said. “Sadly I don’t think it’s going to stop until we end this evil agenda that is attacking children.”

In response, Latina trans activist Alejandra Caraballo wrote on Twitter, “This is the explicit endorsement of terrorism against LGBTQ people and Tucker Carlson just smirked as she said it.”

Fox News broadcast that mass shootings in LGBTQ spaces will continue unless we adopt laws that medically discriminate against transgender people. This is direct amplification of the threat of mass murder for political gains https://t.co/E7QKWw5uIV

YouTuber Tim Pool accused Club Q of holding a “groomer event” on the night of the shooting, writing, “We shouldn’t tolerate pedophiles grooming kids. Club Q had a grooming event. How do prevent the violence and stop the grooming?”

Club Q had a grooming event

How do prevent the violence and stop the grooming? https://t.co/loVoG3A3ot

In response to Pool’s tweet, right-wing anti-LGBTQ vlogger Steven Crowder — a man who once inspired a hate campaign against a queer journalist — wrote that the answer to stopping child sex abuse by queers was “Strong legislation to protect children and an armed populace to protect themselves/their kin.”

The right are now openly justifying the slaughtering of LGBTQ+ people right after a tragic mass shooting. Years of lying and dehuminization have prepped their audience for violence pic.twitter.com/WiUI5IO5m9

I don’t think we have to tolerate pedophiles because some asshole shot up a gay bar.

Frankly, a lot of people trying to convince us we need to tolerate pedophiles seem to be happy to use any excuse to silence our opposition.

In response to Crowder’s tweet, media brand The Serfs wrote, “The right are now openly justifying the slaughtering of LGBTQ+ people right after a tragic mass shooting. Years of lying and dehuminization have prepped their audience for violence.”

The right are now openly justifying the slaughtering of LGBTQ+ people right after a tragic mass shooting. Years of lying and dehuminization have prepped their audience for violence pic.twitter.com/WiUI5IO5m9

Far-right troll Jack Posobiec asked his nearly two million followers on Telegram and the right-wing Twitter knock-offs, Gab and Truth Social, “Are we just not supposed to talk about the US Army Major taking his family down to the local drag club for a night out?”

In response, one Gab user wrote, “If it’s not bullshit he’s helping to molest children and he’s all for it. Fa***t dad in closet.”

While many called the shooting a “false flag operation” — a common right-wing claim saying that mass shootings are staged for political reasons — one Gettr user wrote, “Gay men dressing up like women and mocking women is misogyny. Anyone who supports this is a misogynist. This man is not a hero. He just hates women.”